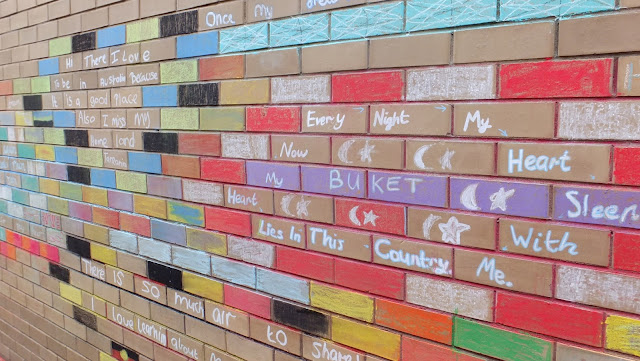 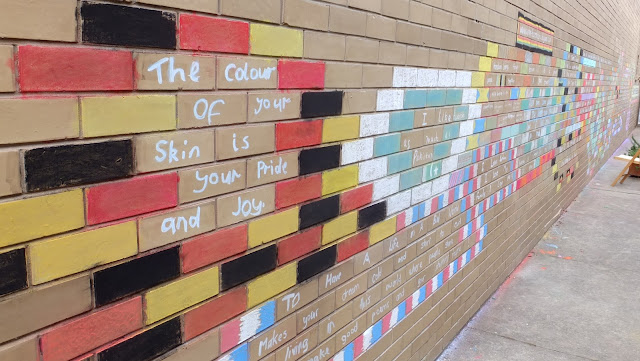 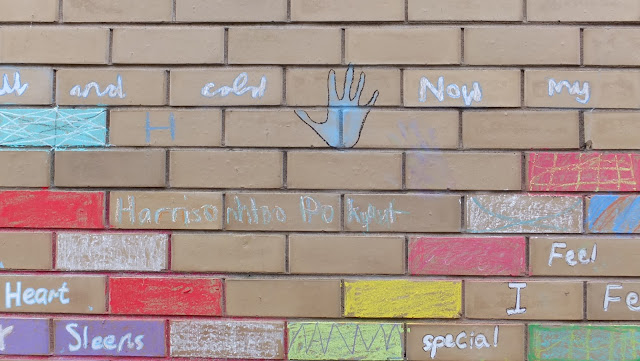 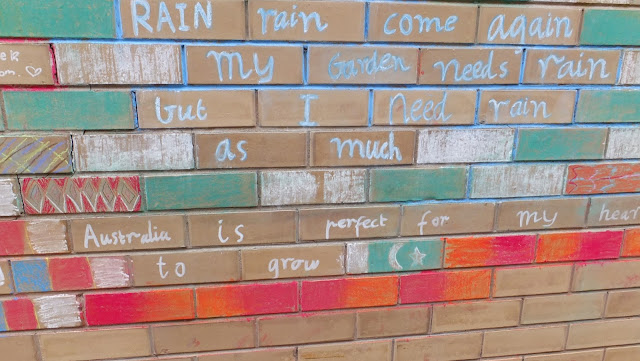 Harrison is 12 years of age, and attends Horsham College. He has contributed so much to the WOW sessions, not only in writing his amazing poetry up on Army Lane wall and colouring his brick borders so beautifully, but also Harrison has provided much honest and valuable information to the rest of the WOW group at the Mibus Centre on Thursdays.....information on life in Thai refugee camps, and then arriving in Werribee, where he lived before coming to Horsham. He says that while Horsham is very safe, which makes life much more comfortable, that it is also very serious. A little more music and colour in the street would perhaps liven this old town up. Well, Army Lane is a good way to get this all rolling, Harrison. Thanks for being such a fantastic WOWer! 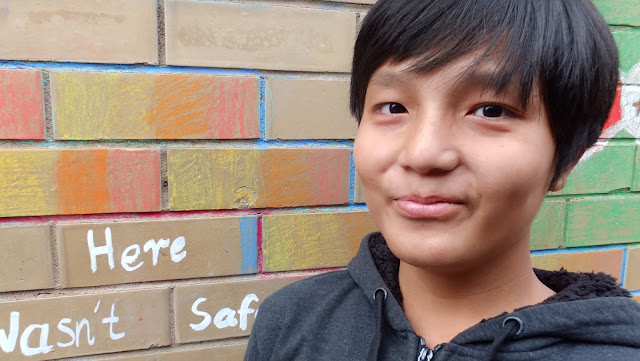 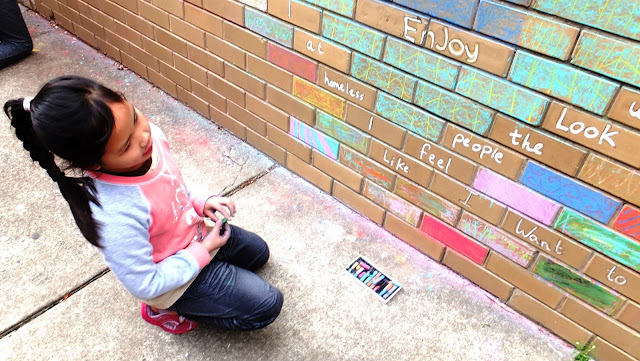 Above is a shot of Sarah Htoo Po Kyaut, six year old sister of P'Leah and Harrison. Sarah has been so terrific in colouring in bricks in Army Lane, she has a real sense of colour and pattern matching! The wall really needed her assistance to look as good as it does, thank-you for your help, Sarah! 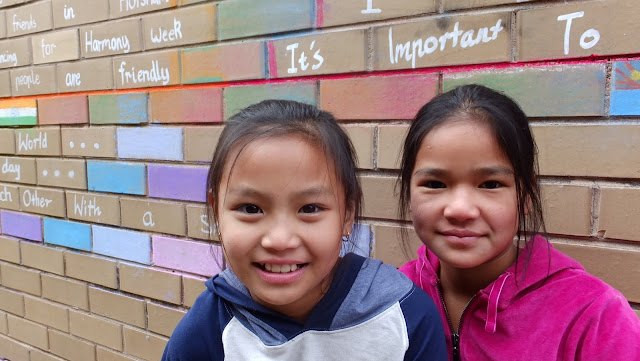 Above P'Leah Htoo Po Kyaut, aged 10, and Soe Son Di Shwe Ta Lee, aged 11. These two young writers have been completely inspiring for the others in the group, they have a rare ability to describe their innermost feelings so honestly and poetically ... and like Harrison, their stories on their old lives are so important for us all to hear. These two thoughtful WOW participants agree with Harrison, that life is great in Horsham because it is so safe, which is such a massive relief compared with living in overcrowded refugee camps in Thailand....but why are the walls of shops and houses all coloured in pale browns? Why aren't houses painted in attractive colours? Why does everyone use more or less the same colour paint? Are the houses trying to reflect the colours of the sand or dirt around Horsham? (Readers, please feel free to answer these questions or comment below the post.) 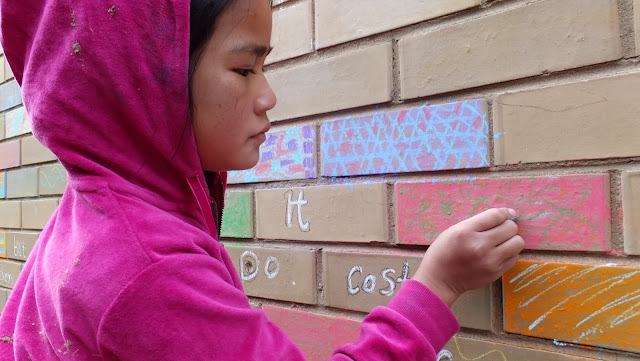 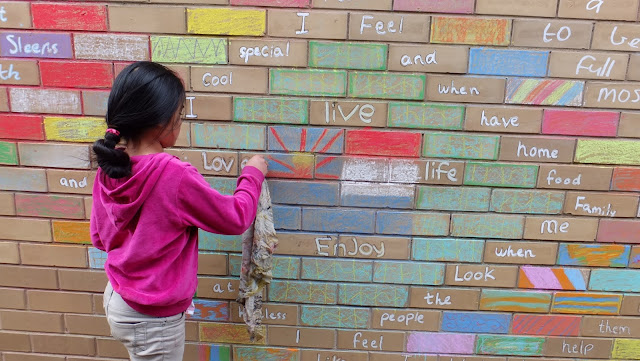 Look at the Karen flag in the photo of Soe Son Di above. See how the blue faded after the rainfall? Soe Son Di is wiping some of the chalk drips off. And look at how Soe Son Di coloured it all back in so the flag looks as good as new (below)...Good Work, Soe Son Di, it looks fantastic! 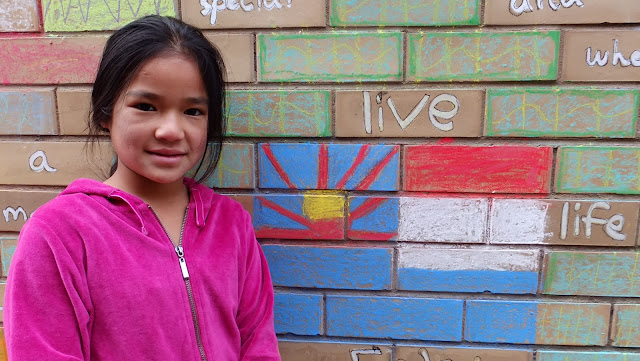 Soe Son Di is such a hard worker. Here she is rubbing off all the accidental chalk marks around the wall. Everybody had left for the afternoon on that Saturday, but Soe Son Di made sure there was nothing left unfinished before leaving. 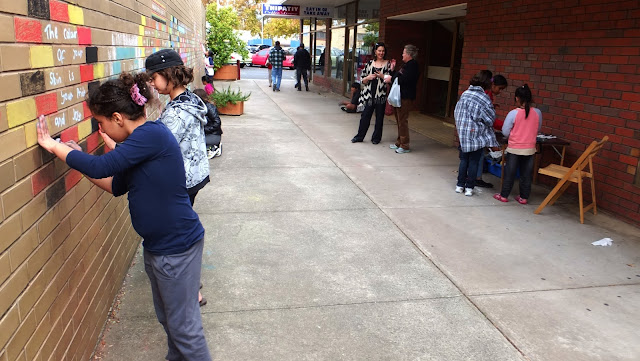 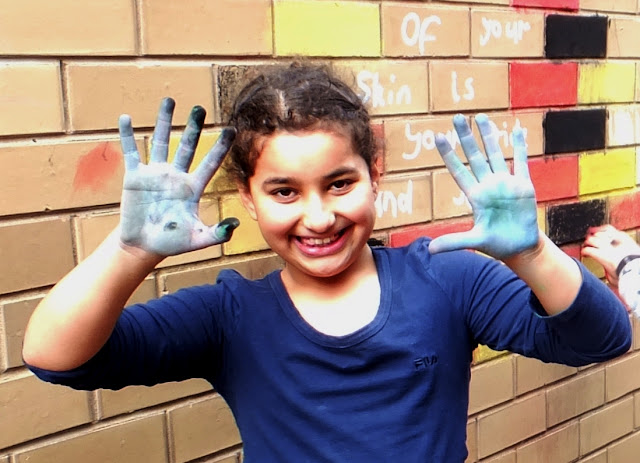 Yaren Akiz doesn't just work on her own words and colours, she also helps out anyone who needs a spare colouring hand or two. Here are two beautiful shots of Yaren as the assistant colouring artist. Beautiful work, Yaren! 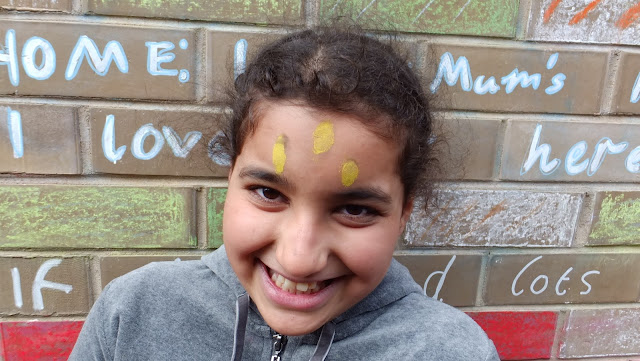 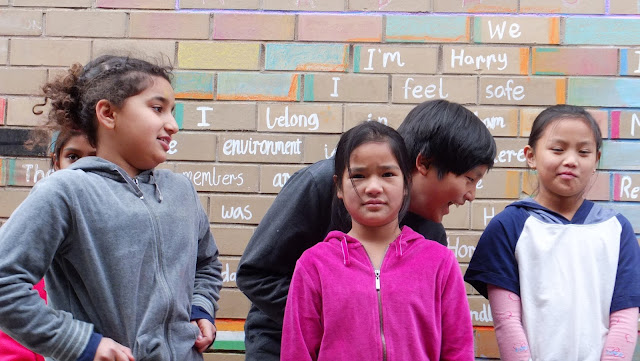 I love this shot of the WOW group before they settle into a smiling pose for the media shoot. Priceless facial expressions! 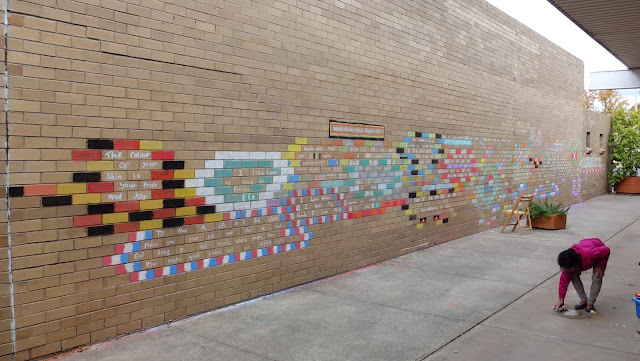 Another giant thank-you to Soe Son Di, here she's washing the crushed pieces of chalk off the pavement before we go home, so the workers using the lane on Monday morning can have a clean walkway. These kind of finishing up details are extremely important while working in a public place. Soe Son Di understands this. I must make sure she gets an extra large piece of that delicious hedgehog from Cafe Thipatiy next Tuesday!