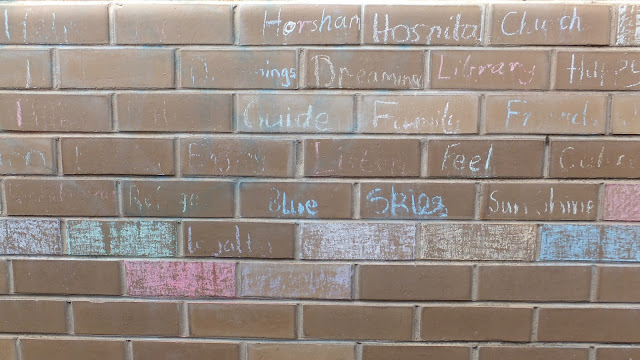 
So we met up again at Cafe Thipatiy, Army lane, Horsham. It was Tuesday the 23rd April, and we were very very excited. I had scrubbed the wall down so we had a new blank canvas, and a lot more writing to put up this time. 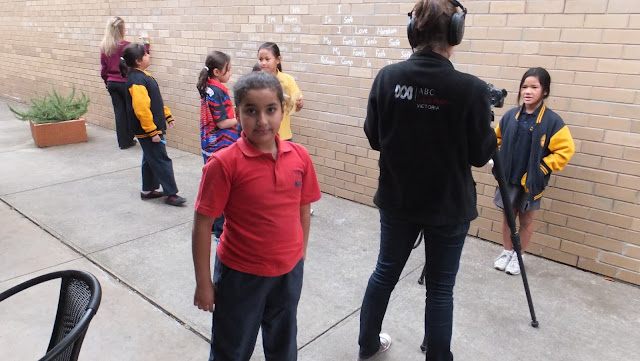 Larissa Romensky from ABC Open was there to interview everyone and catch the action. That's Soe Son Di being interviewed now. Yaren (pictured here in front) turned out to be a fantastic assistant for Larissa, eventually taking over the sound controls like a real pro. 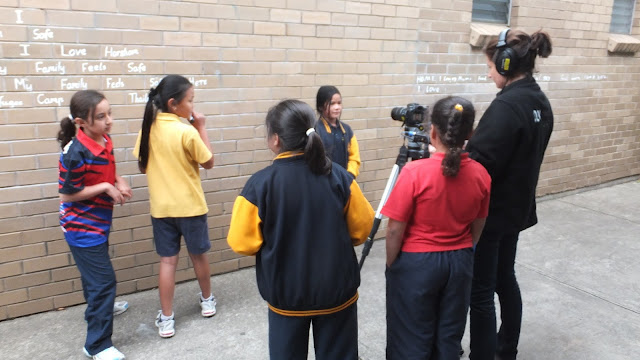 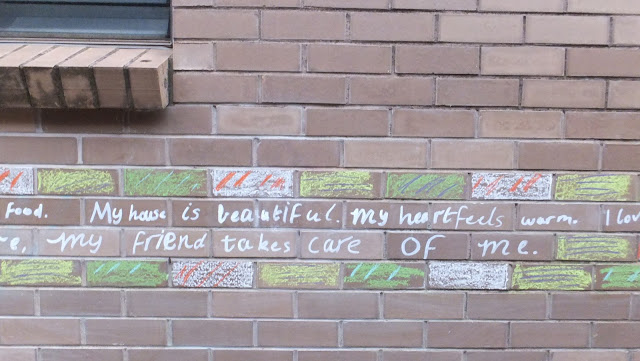 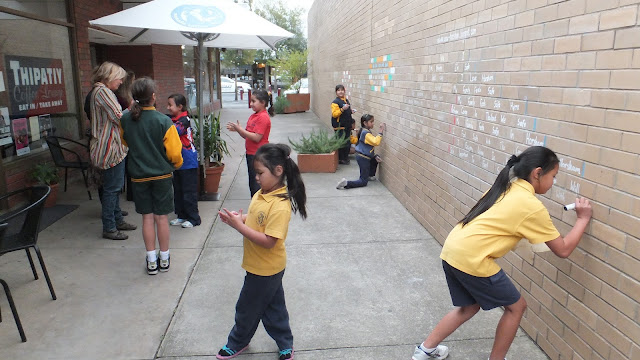 We had P'Leah's little sister, Sarah, join us again on Tuesday, she helped to frame P'Leah's writing with the Karen flag colours. Below is a detail from P'Leah's poem, the whole poem is about how safe Horsham is compared to the refugee camp in Thailand. She finishes with the line: It's important to be safe. Thank-you, P'Leah. And thank-you to P'Leah's father also, who showed me an image of the Karen flag so we could pick out the chalk colours to outline P'Leah's words. I knew I had seen this flag before, then I remembered that it was the backdrop for the Karen New Year celebration in Nhill, which I was lucky enough to catch this year. 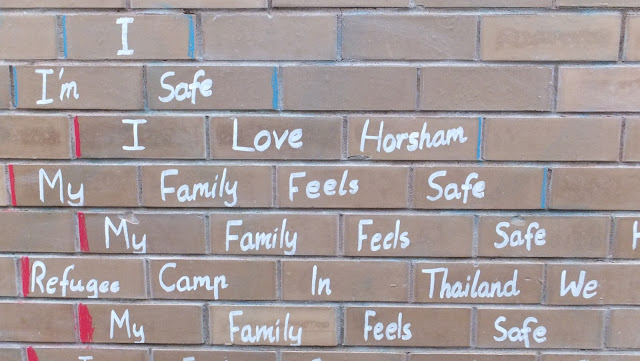 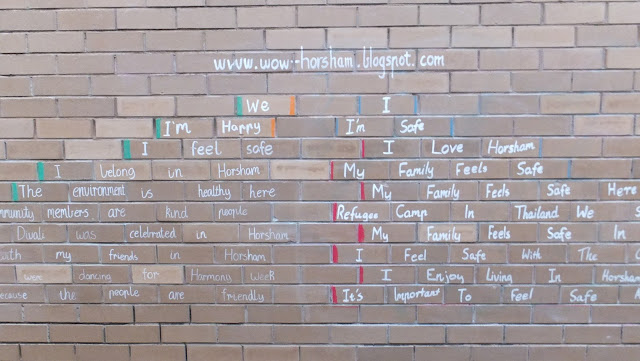 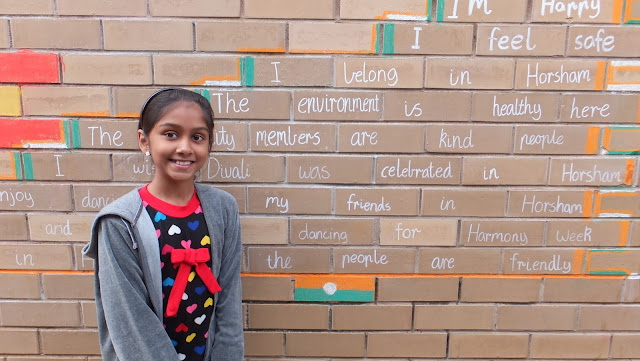 Madhu has written a beautiful poem to complete the collaboration with P'Leah. My favourite line is "I wish Divali was celebrated in Horsham." Divali is the Hindu "Festival of Lights", which I was very lucky to catch in Pushkar back in the early 90s. Check out the link by clicking on the word Divali to see the vibrant colours and lights and celebrations of this exciting festival. Then you will understand just how much Madhu must miss her Indian culture, even though she also feels she belongs to Horsham. 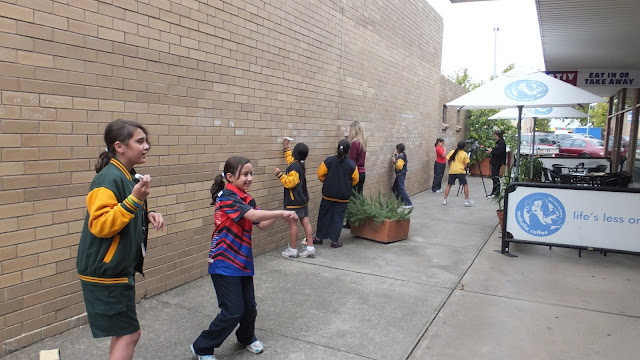 Yasmin Harradine joined the group on Tuesday, coming all the way from Dimboola. Yasmin is our first indigenous Australian WOW attendee, and I know from my casual teaching days at Horsham PS last year that Yasmin is also a very talented artist. I'm absolutely delighted to have her join the WOW club. Thank-you Mary French, (Yasmin's Art teacher at Dimboola PS) for bringing Yasmin to Tuesday sessions from now on. 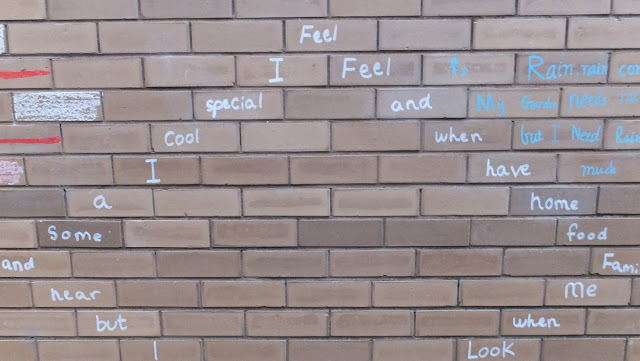 Soe Son Di couldn't make it on Thursday to finish off the work above, she just needs the colours now. This is a really lovely written piece, which has a really significant ending to it, it's has been cut off in this photo. We'll save it up for when it's all coloured in properly.


Thursday 25th April 2013
Larissa is back with us on Thursday morning to continue videoing the Army lane wall. We are so lucky to have such a dedicated and supportive media resource such as Larissa. 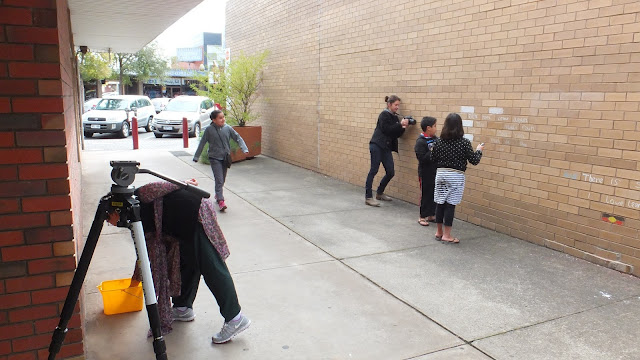 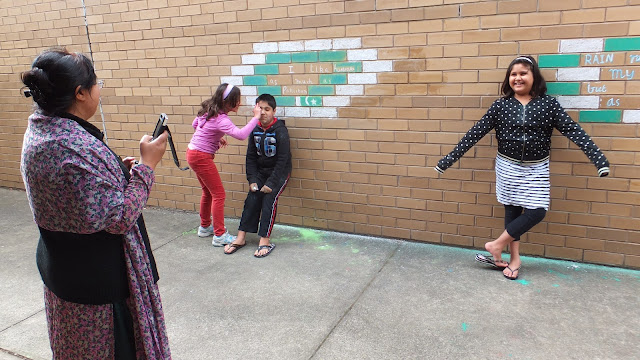 Hozaira brought her mother, Noreen, and little brother, Abraham, to the writing party. Both Abraham and Hozaira have chosen to border their writing with the colours of the Pakistan flag. Buket seems to be applying some warpaint to Abraham's face. 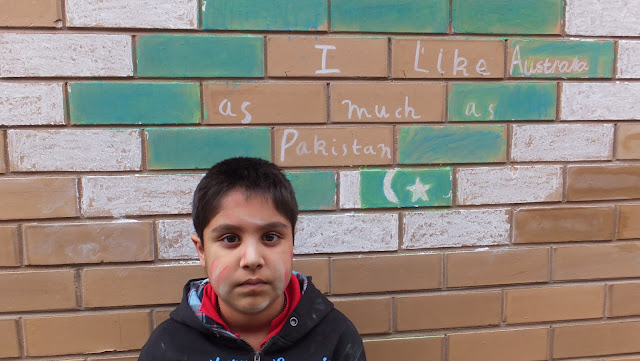 What a fantastic message, Abraham! Thank-you for coming in as our WOW guest on Tuesday. I'm so glad you like living here in Horsham. And I also love the chalk warpaint...our WOW warrior! 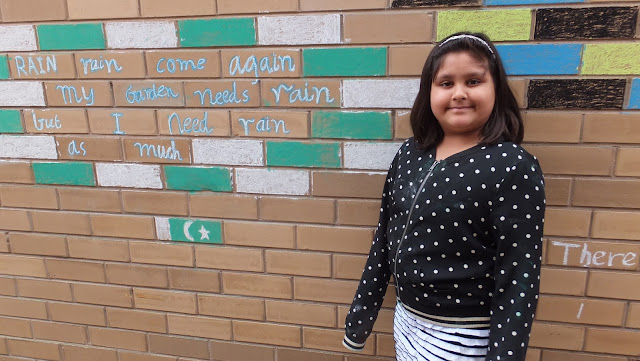 Thank-you Hozaira! Yes, you are absolutely right, we all need the rain as much as the garden needs it. Rain these days brings so much hope and joy for all of us here in the Wimmera, it's a real blessing at any time. Even if it washes our writing off! That just means that we can write something new and different up. 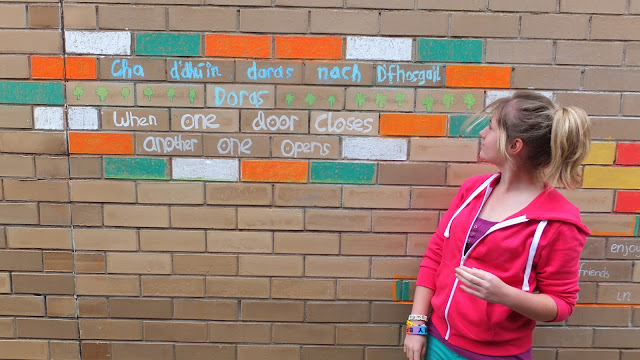 We have Shauna Stringer on board now, this is very exciting for the WOW group. Shauna arrived in Horsham from Ireland just six months ago, so it must still be pretty strange for her to be living here, and attending a new secondary school in a new country and culture on the other side of the world. I was so pleased that Shauna elected to first write in her native Irish Gaelic language before giving us the English translation. And the message is so beautifully simple and relevant, a wonderful reminder to us all who read it. Thank-you, Shauna, I'm really looking forward to seeing more of your writing up on the walls. It was Shauna's idea to use the Irish flag colours too, an idea that was taken up eagerly by the rest of the WOW writers. Below is a gorgeous photo of Shauna and her mother, Pauline. Pauline can speak Irish Gaelic, I must ask her if she can give me Irish lessons one day. 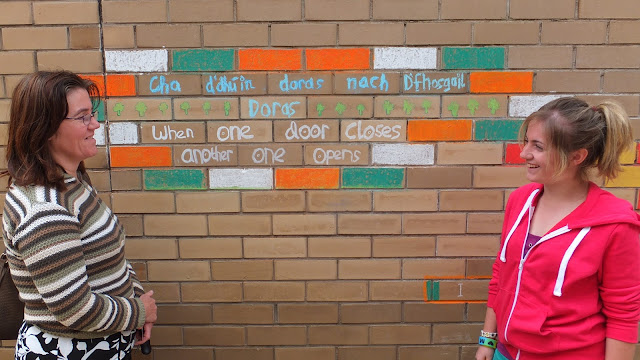 Buket's poetry is a joy to read. Here she is below, adding the final touches to her message. I love the Turkish flag's moon and star adorning her wall poem. And Buket's beautiful happy face too! 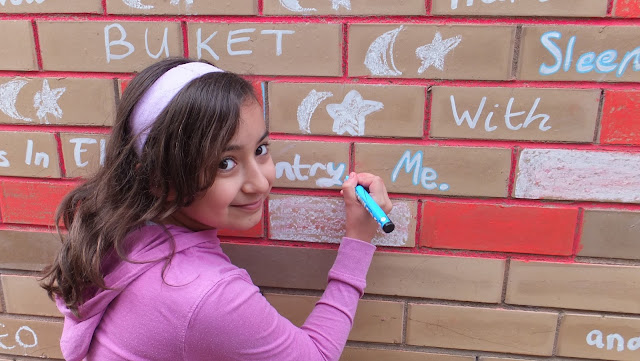 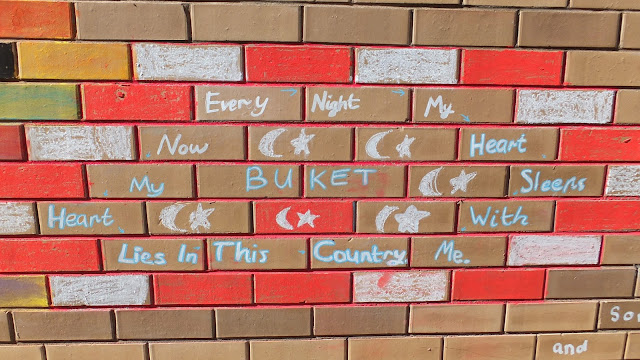 Can you see the little blue arrows directing you to follow the words down both sides? You might try clicking on the image to zoom in.


"Every Night My Heart Sleeps With Me.
Now My Heart Lies In This Country." 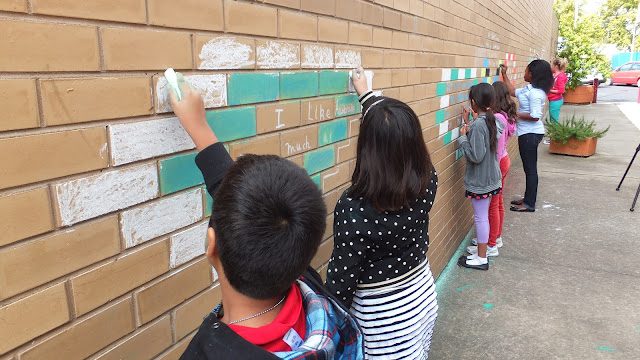 Look who joined in on Thursday's session...Tina! Yay, thank-you Tina, for writing up your message and using the Tanzanian flag colours. There was no green chalk left by Thursday, and as it was a public holiday, nowhere to buy more. So Tina began with the colours that were there, and will finish it off next Tuesday with brighter green and also yellow. 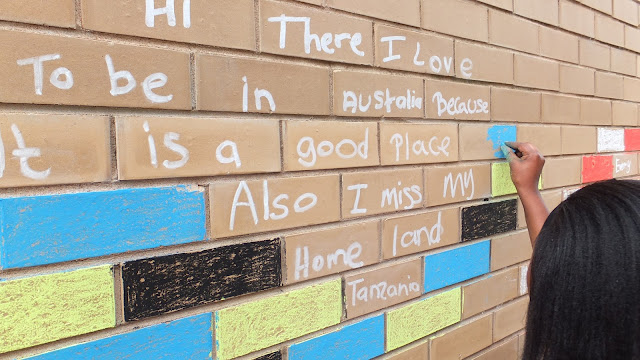 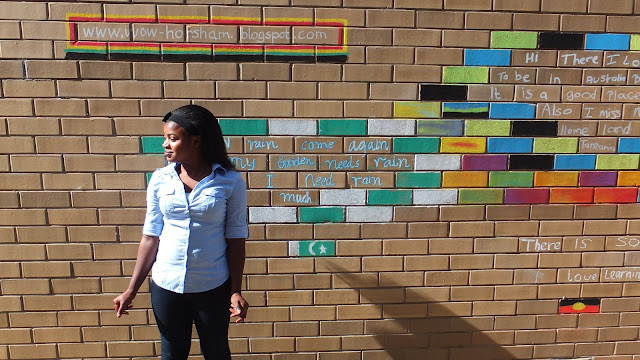 Tina continued colouring in wall bricks with me into the sunny afternoon...a very pleasant way to pass time! Tina has a way with blending colours, doesn't it look amazing? We came up with a new plan on how to finish linking all the various messages in together. Keep your eyes on this blog, as we hope to have the piece finished by the end of next Tuesday's session.
Posted by Mars Drum at 12:57 AM